Final preparations for the 2008 Summer Olympics are in full swing in Beijing. This includes completing hundreds of construction projects, reconstructions, pollution controls, cultural training, and a general “beautifying” of greater Beijing. Rehearsals and drills take place daily as Chinese citizens hurry to finish up - after all, the whole world is coming soon. The Olympics are set to begin on August 8th. 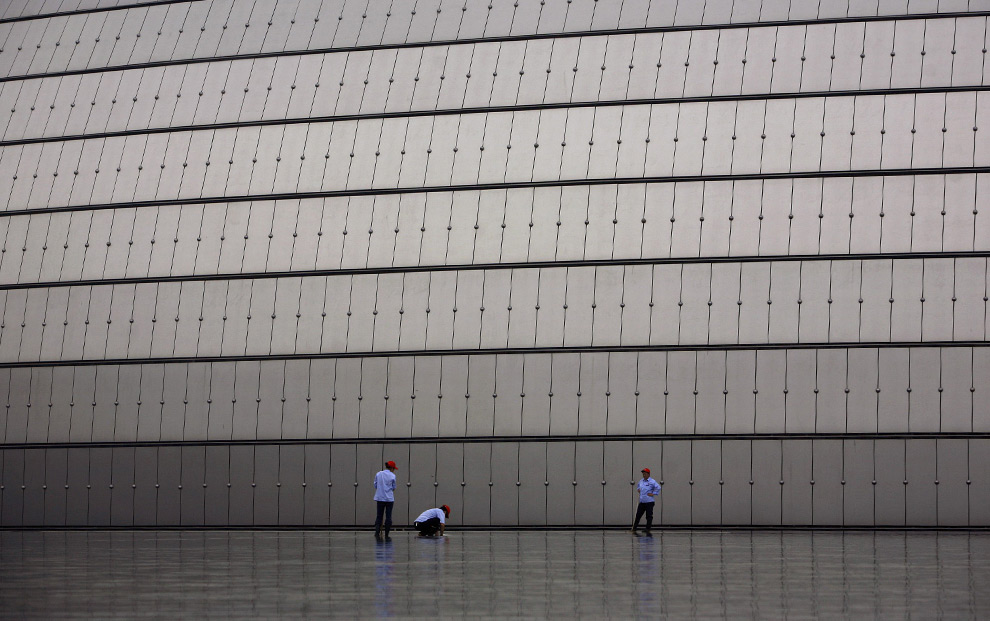 Cleaners stand in water as they scrub the exterior of the National Grand Theatre, which has been nicknamed the “egg”, in Beijing July 11, 2008. (REUTERS/David Gray) 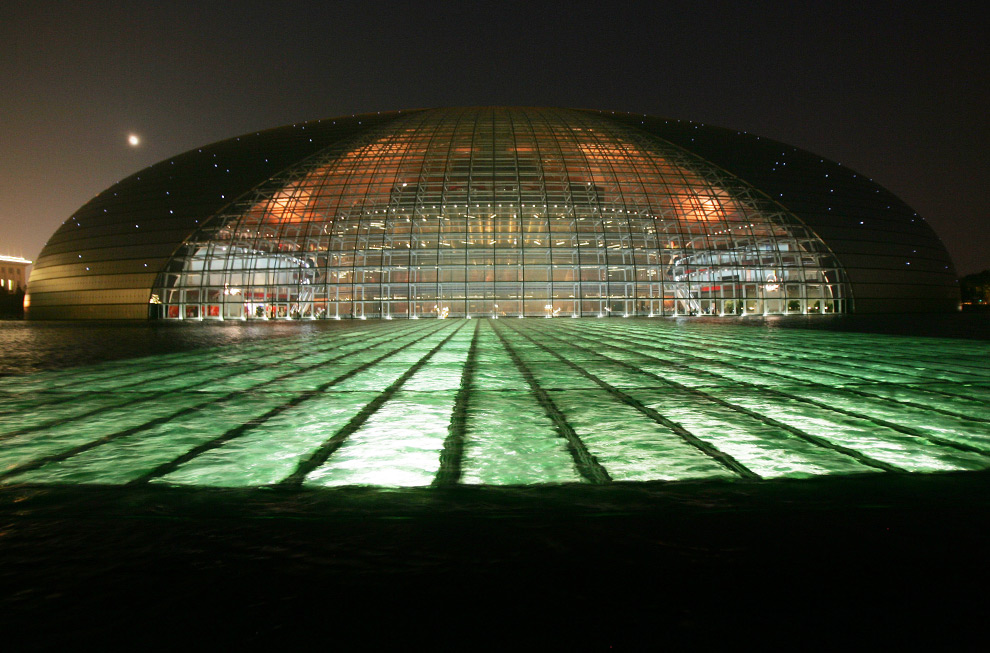 The moon rises over the new National Theater in Beijing Wednesday July 16, 2008. The glass and titanium dome, nicknamed “The Egg” is one of a series of landmarks, notable for their futuristic design, that will greet visitors to the Olympics. (AP Photo/Greg Baker) 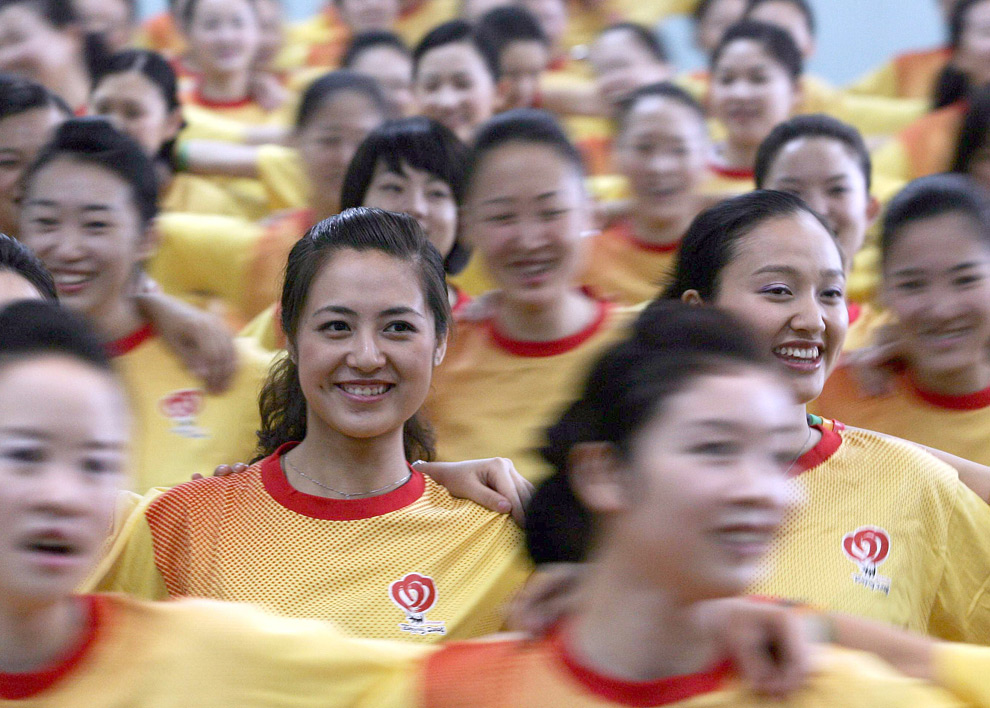 Chinese cheerleaders for the 2008 Beijing Olympic Games gather for practice in Beijing on July 18, 2008. Cheerleading is a quintessentially American tradition but has become more and more popular in China, thanks in large part to the phenomenal success of US basketball among China’s youth, who are not shocked by scantily-clad dancers. (STR/AFP/Getty Images) 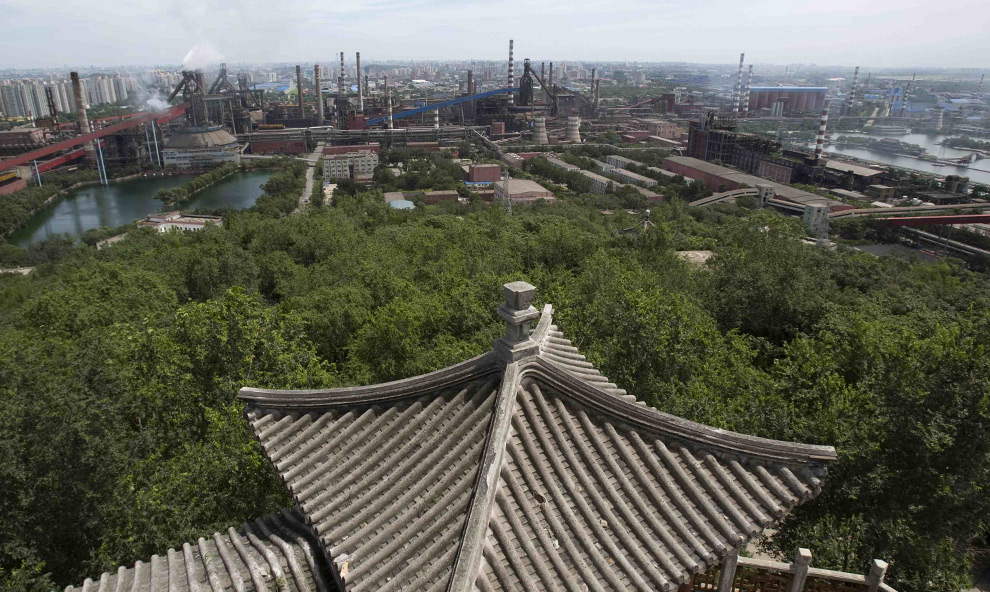 A view of the Shougang Group compound on the outskirts of Beijing in this July 17, 2008 photo. There is little doubt at ordinary Beijingers’ ethusiasm for next month’s Olympic Games. But a whole series of problems that have proven tough to fix could give visitors an Olympic-sized headache, and may put many off coming altogether. The Shougang Group, one of China’s leading steel makers and the capital’s major polluter, is fulfilling its commitment to cut output and pollution by 70 percent for the Olympic Games, a company source said Friday, July 11th. (REUTERS/Darren Whiteside) 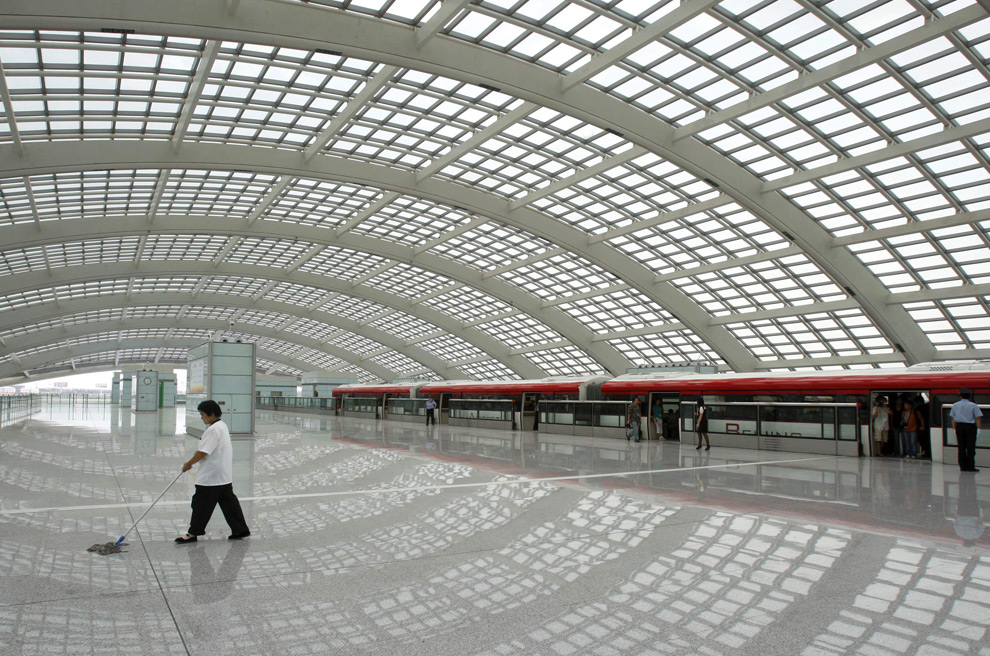 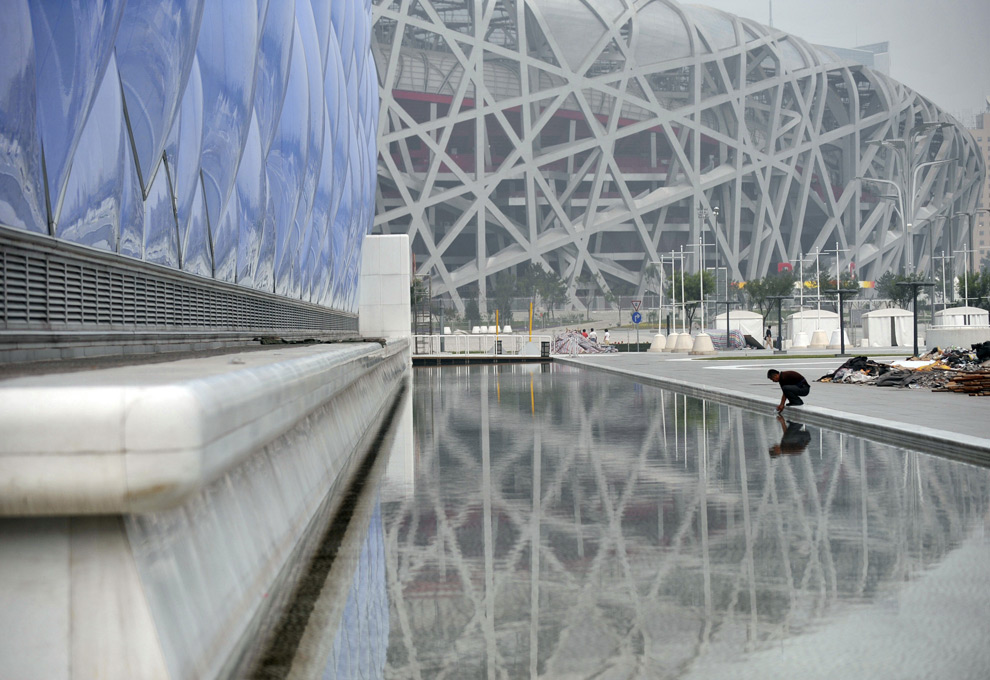 A worker washes his hands in a moat around the National Aquatics Centre also known as the Water Cube, at the Olympic Green in Beijing on 18 July, 2008. With just 21 days to go the finishing touches to Olympic venues continues for the opening ceremony on 8 August in the National Stadium better known as the Bird’s Nest. (PETER PARKS/AFP/Getty Images) 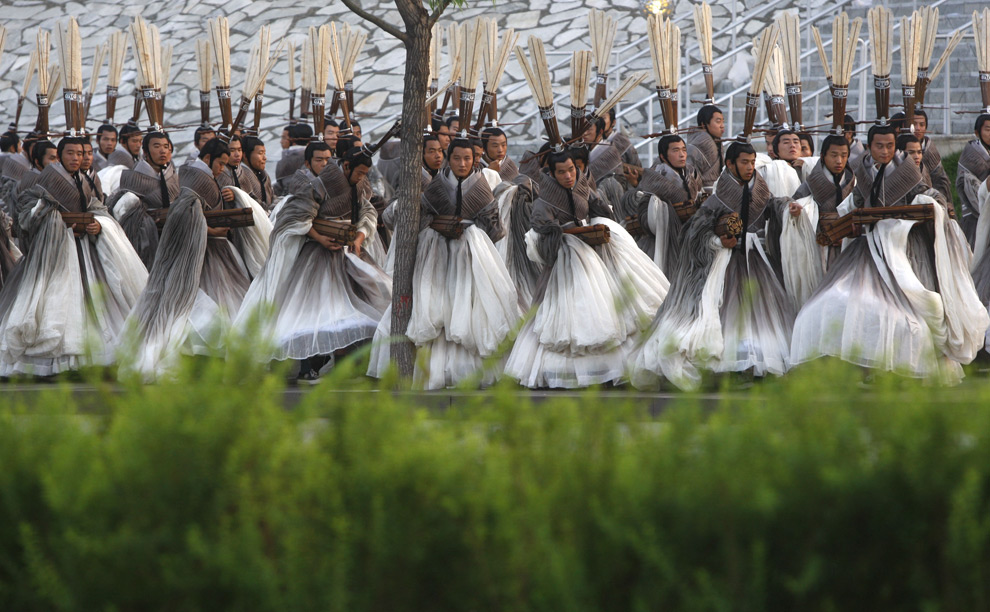 Chinese performers wait to take part in the rehearsals of the Olympic Games opening ceremony to be held at the Bird Nest National Stadium in Beijing, China, Wednesday, July 16, 2008. Full dress rehearsals are conducted under a cloak of secrecy ahead of one of the most anticipated summer Olympic Games. (AP Photo/Ng Han Guan) 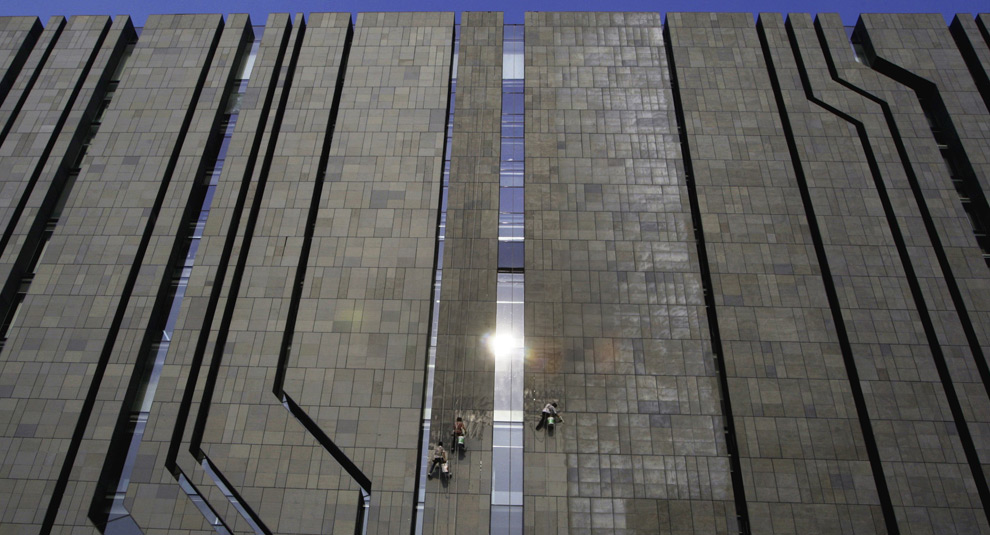 Cleaners abseil down the exterior of the International Broadcasting Centre (IBC) building at the Olympic Green in Beijing July 16, 2008. (REUTERS/David Gray) 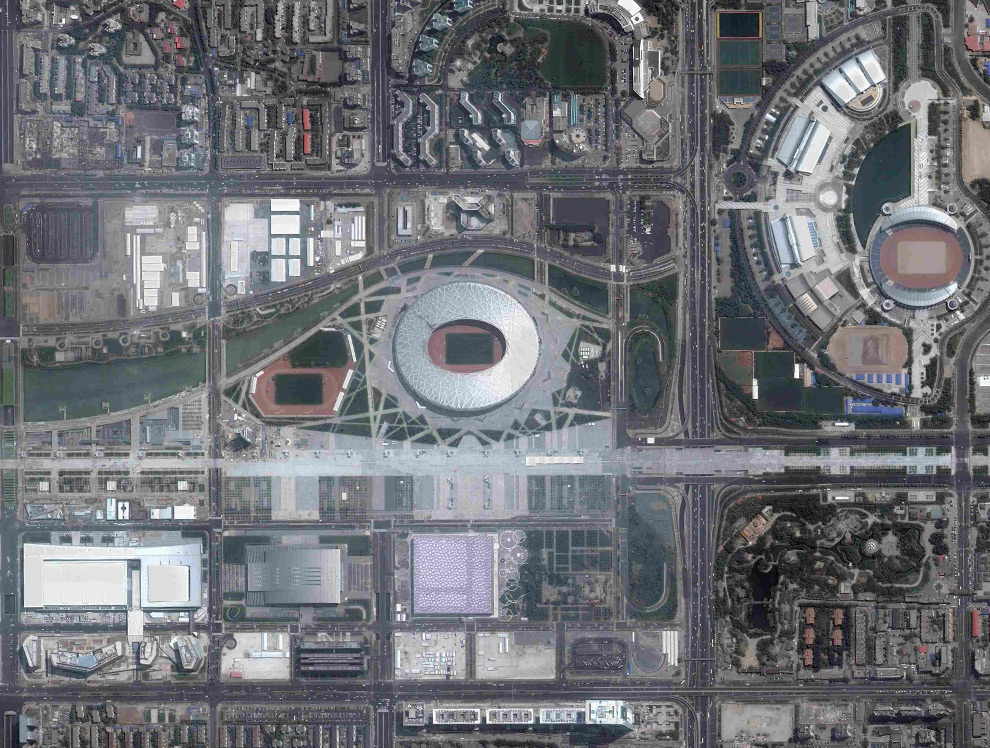 The Olympic Green in Beijing is seen in this satellite image collected by DigitalGlobe on May 25, 2008 and released to Reuters July 18, 2008. The National Stadium (center), also known as the Bird’s Nest, the National Aquatics Centre (lower center), also known as the Water Cube, and the Olympic Sports Center Stadium (top right) are seen. (REUTERS/DigitalGlobe/Handout) 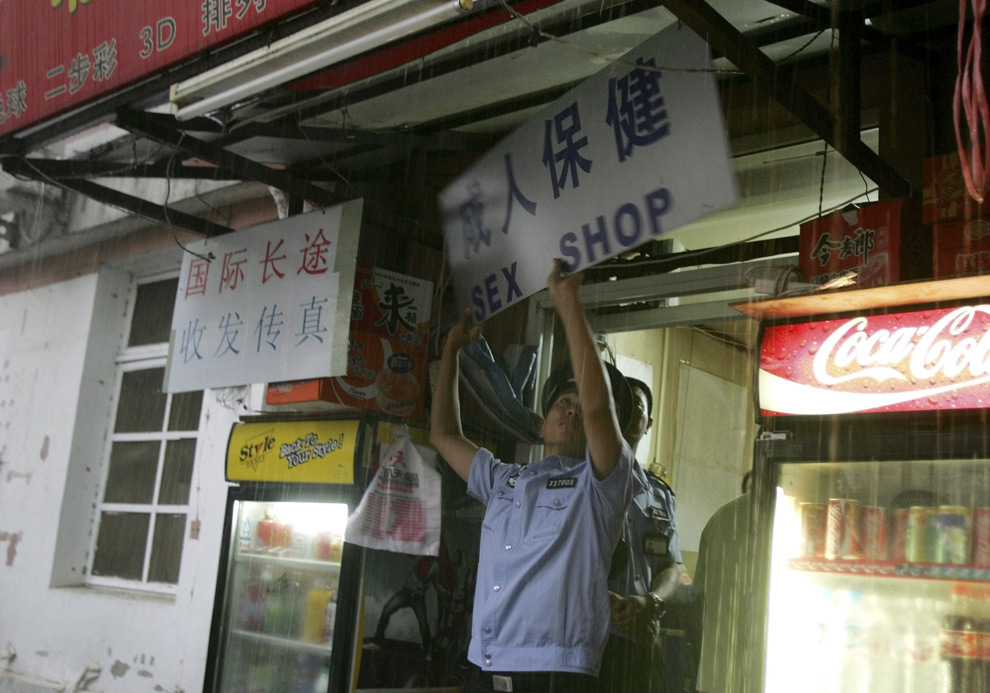 A policeman removes a “Sex Shop” sign from a store in Beijing Friday, July 18, 2008. Authorities are conducting a pre-Olympic campaign to rid the city of anything deemed unsightly before thousands of competitors, journalists and tourists arrive for the summer games, which open Aug. 8. (AP photo/Greg Baker) 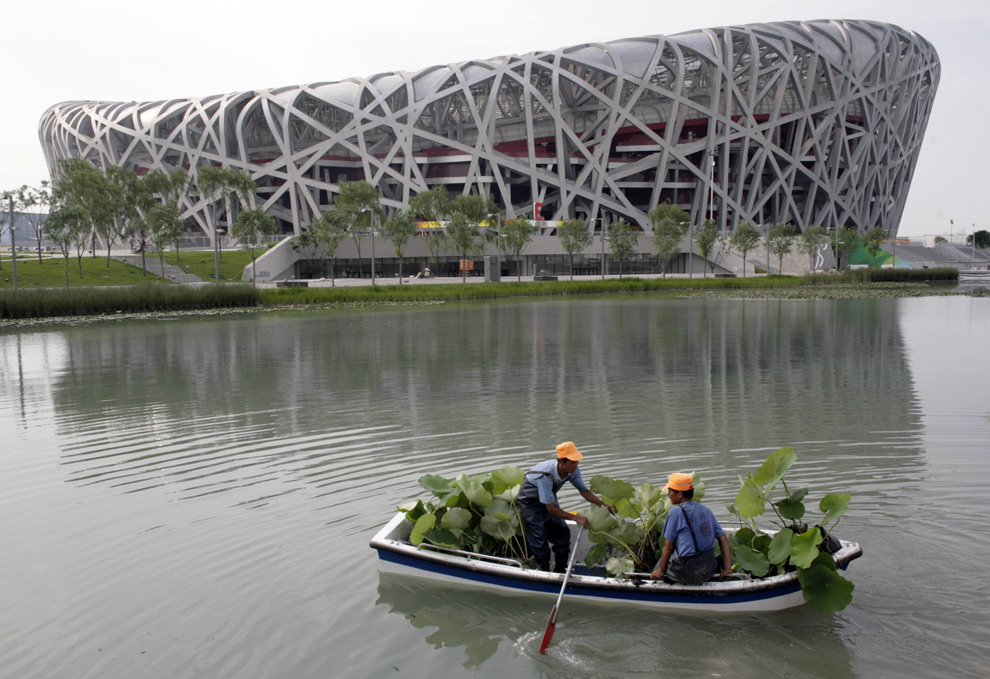 Workers transport flowers to plant in the lake in front of the National Stadium, also known as the Bird’s Nest, in Beijing July 19, 2008. The International Olympic Committee recently praised Beijing for setting a “gold standard for the future” in its preparations for the Games, which begin in less than a month. (REUTERS/Reinhard Krause) 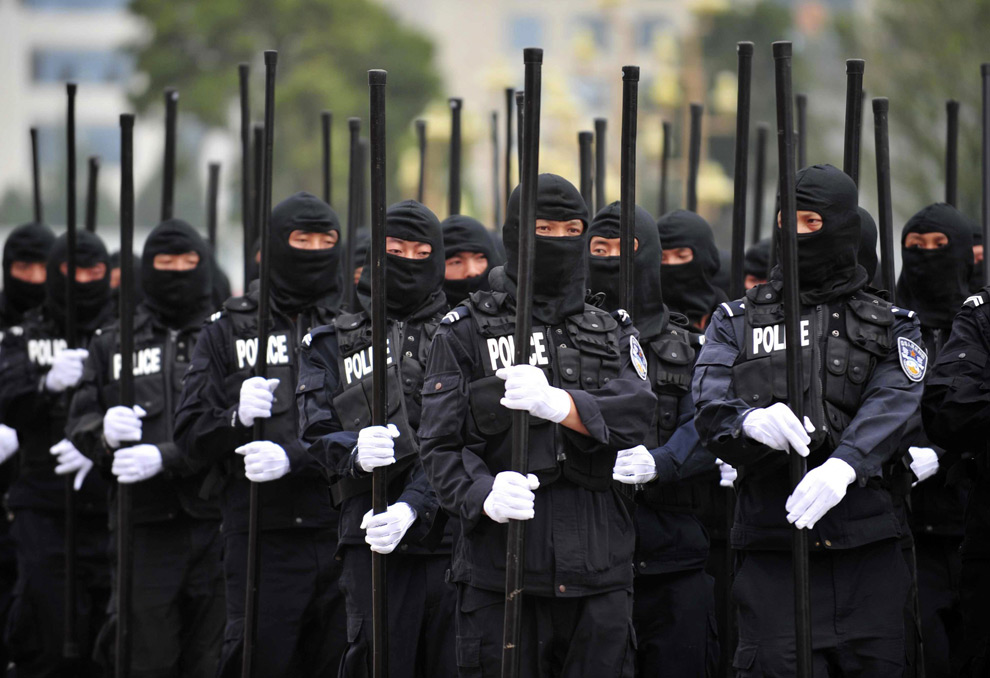 Policemen hold sticks while preparing for an anti-terrorism drill in Kunming, Yunnan province, July 18, 2008. China will have nearly 100,000 commandos, police and members of the military on standby up to and during the Beijing Olympics to handle potential terrorist attacks, state media reported. (REUTERS/Wong Campion) 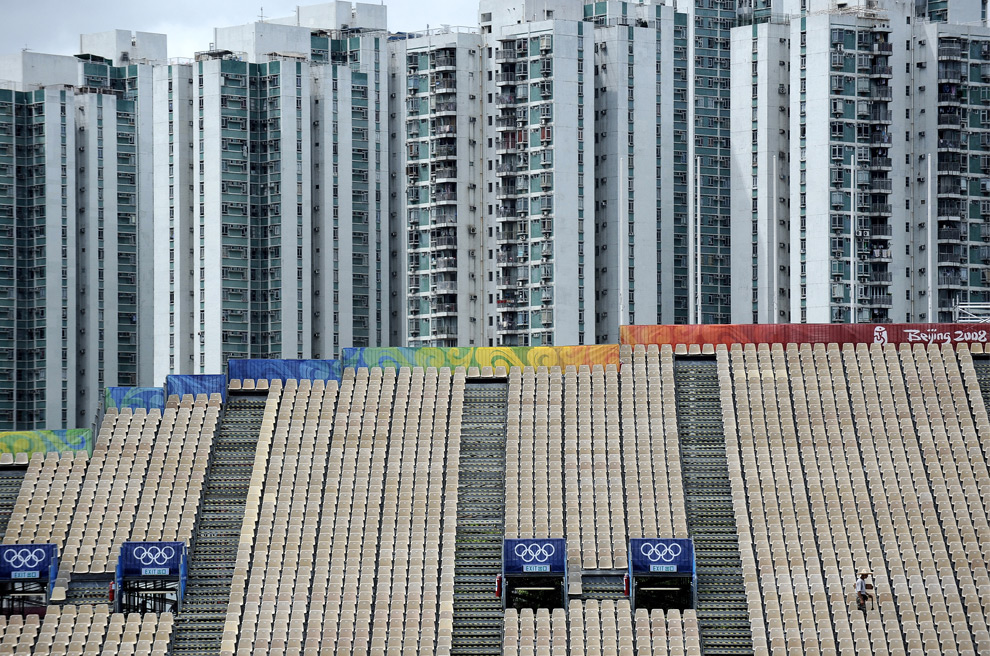 This picture taken on July 18, 2008 shows the Shatin Olympic Equestrian Venue in Hong Kong. The southern Chinese city has built state-of-the-art facilities for the Beijing 2008 Olympic Games after the equestrian events were switched from Beijing because of fears of disease. (PHILIPPE LOPEZ/AFP/Getty Images) 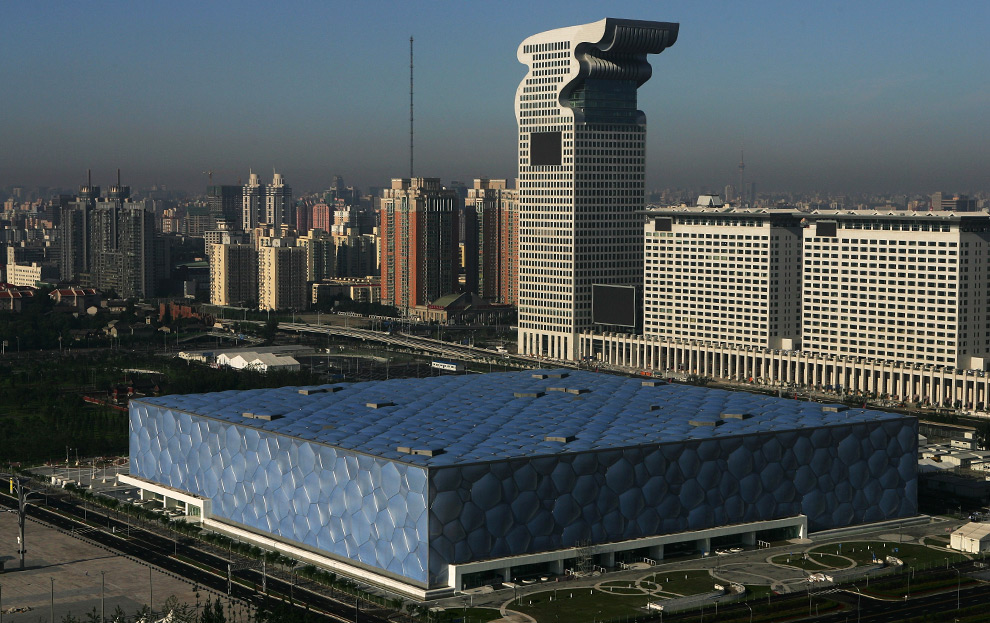 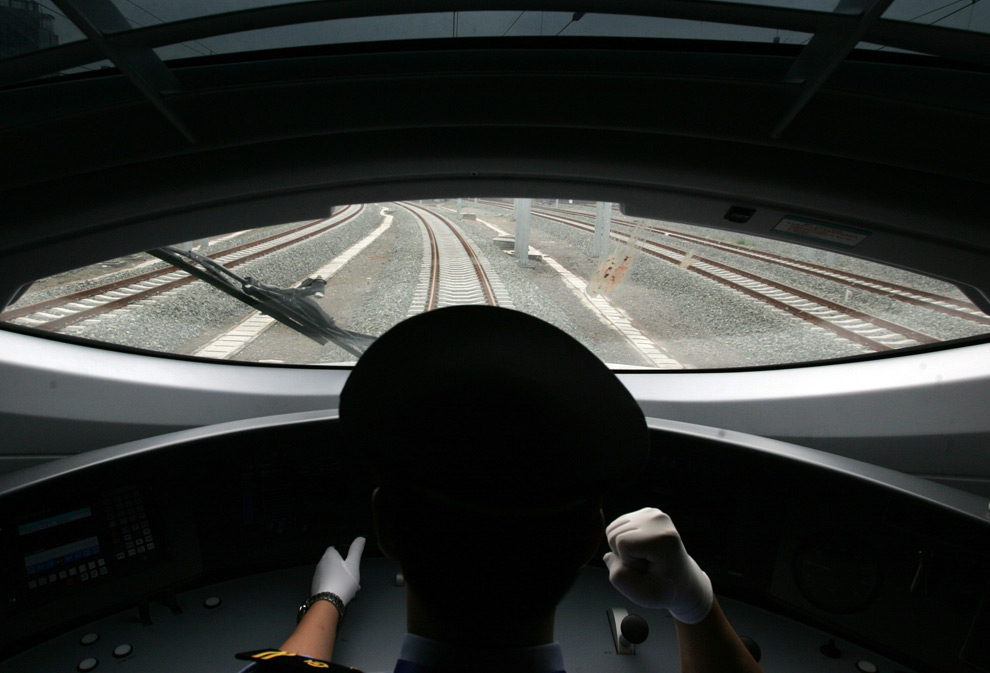 A Chinese train driver takes the new bullet train on a test run on the new high-speed Beijing-Tianjin express railway in Beijing on June 26, 2008. The train, which is scheduled to start service on August 1, has set a speed record in China of 394.3 kph on the 115 km newly-built railway. (STR/AFP/Getty Images) 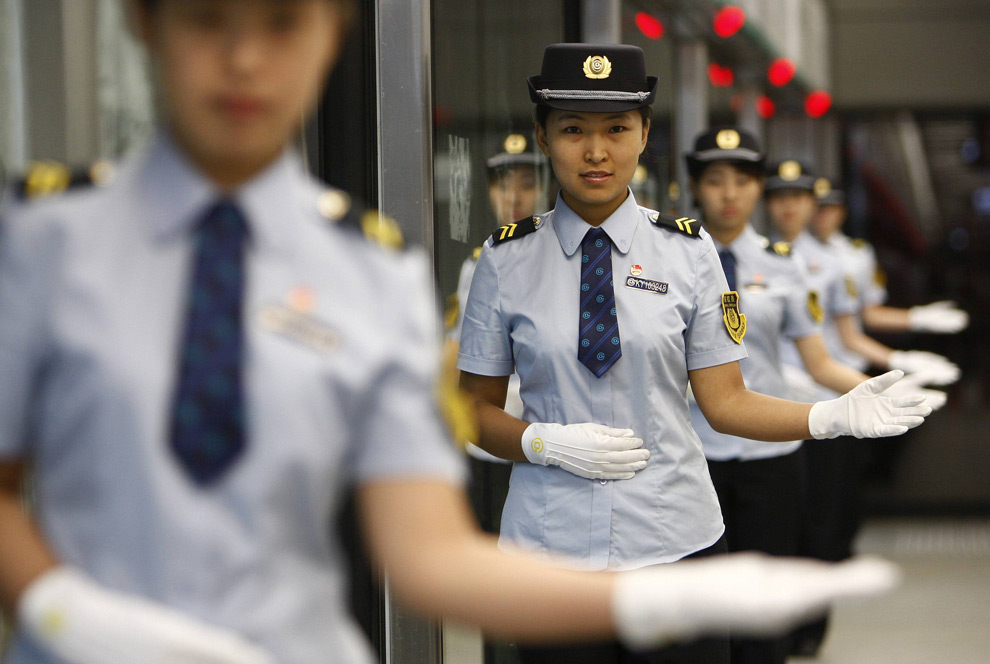 Beijing subway controllers stand on a subway platform inside a new station near the Olympic Stadium during a media tour in Beijing July 19, 2008. Beijing opened three new subway lines on Saturday, delayed from a planned late-June start but just in time to carry passengers banned from their cars as the capital tries to clean up its skies before next month’s Olympics. (REUTERS/Darren Whiteside) 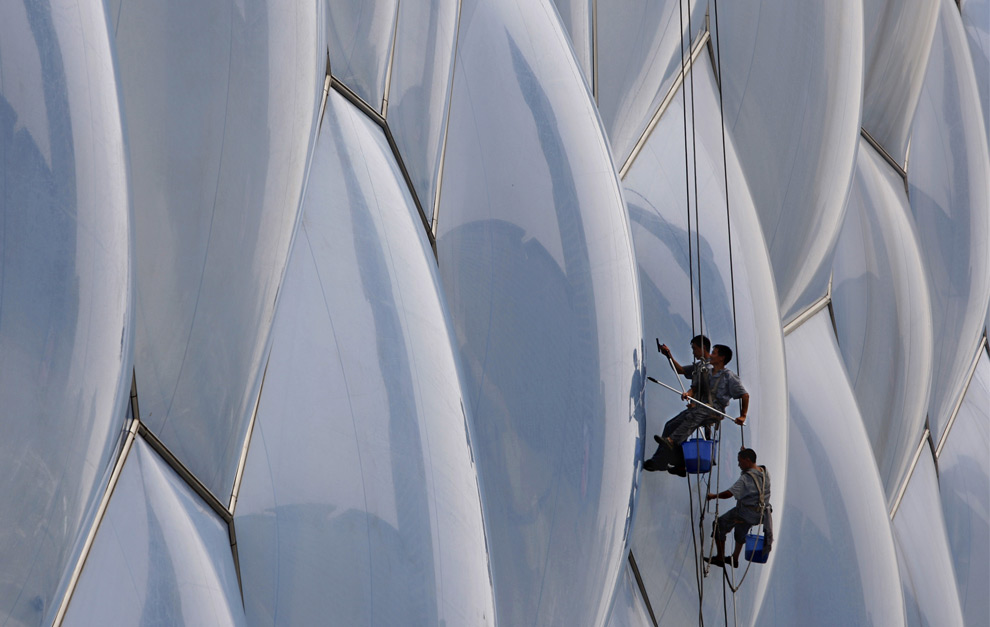 Chinese workers clean the bubble shaped surface of the iconic Water Cube National Aquatic Center in Beijing, China, Friday, July 18, 2008. One of the highlights of the Beijing Olympic Games will be some of the visibly stunning sporting venues. (AP Photo/Ng Han Guan) A view of cooling towers at a Shougang Group steel plant on the outskirts of Beijing July 17, 2008. The head of Shougang Group on Thursday smiled with satisfaction over this week’s four days of blue skies, even as smoke and steam still wreathed his steel plant less than a month before the Olympics. Beijing has ordered polluting plants in the capital city and surrounding provinces to either shut or meet emissions standards, to reduce air pollution during the Olympic Games that begin on August 8. (REUTERS/Darren Whiteside) 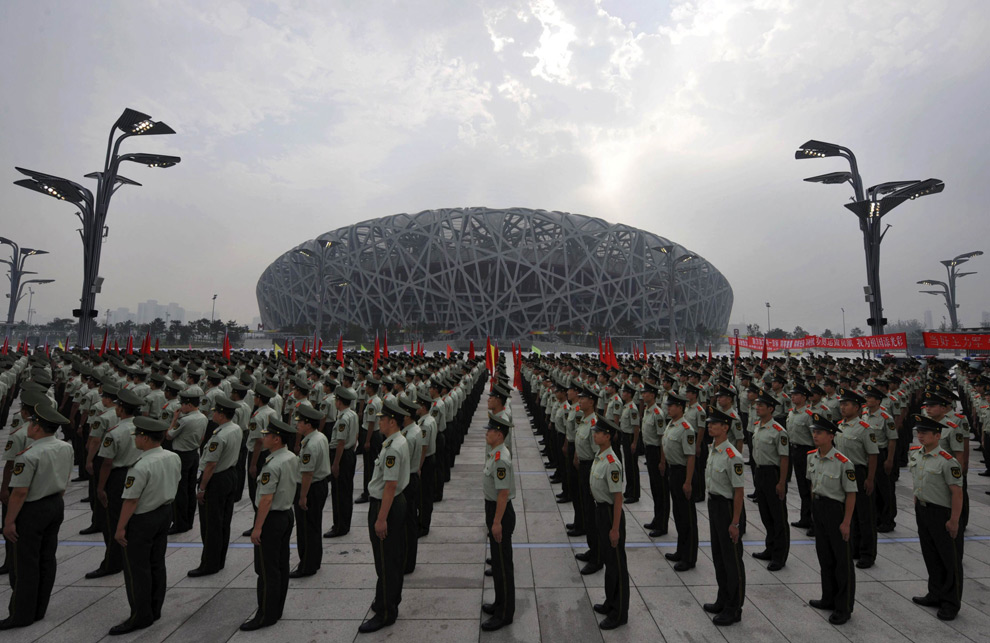 Paramilitary policemen take part in an oath-taking ceremony to ensure the safety of the 2008 Beijing Olympic Games outside the National Stadium, also known as the Bird’s Nest, at the Olympic Green in Beijing, July 16, 2008. (REUTERS/Joe Chan) 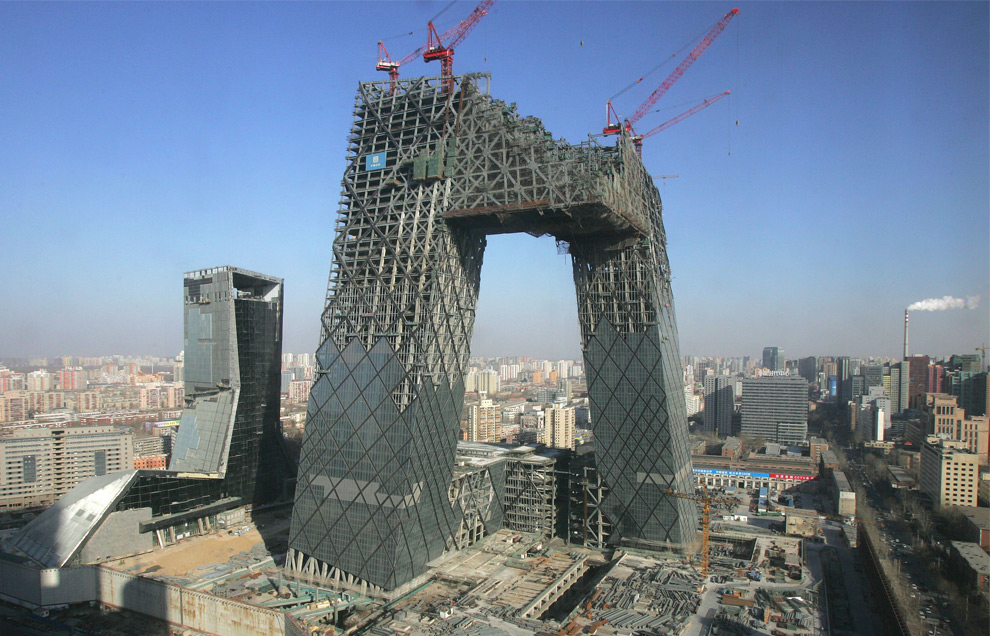 In this Jan. 23, 2008, the construction site of the new China Central Television headquarters building is seen in Beijing. The building’s two angled towers were connected in December to form a continuous loop of horizontal and vertical sections. The spectacular 230 meter (755 foot) building, one of Beijing’s tallest, will house more than 10,000 staff. (AP Photo/Greg Baker, file) 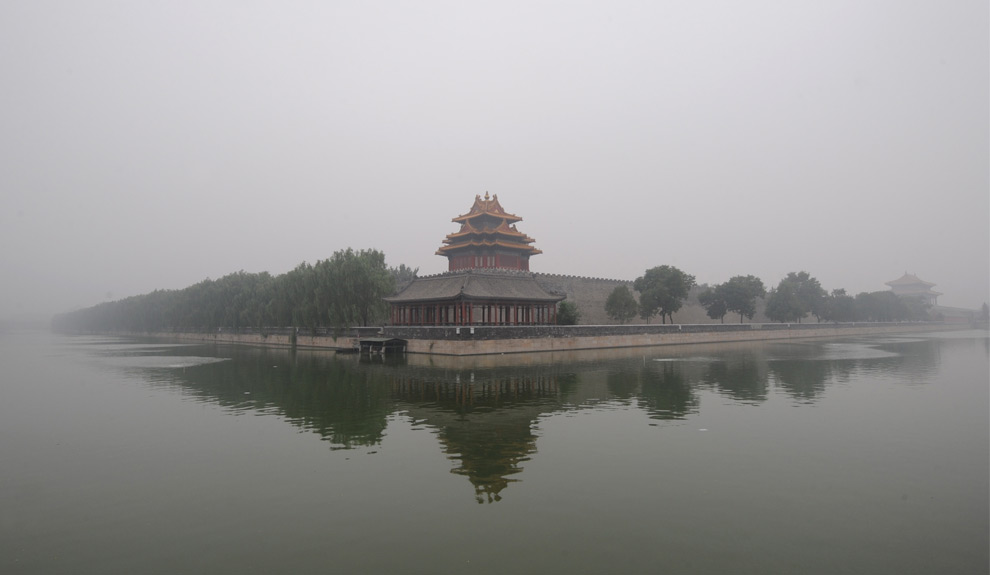 Heavy smog shrouds the historic Forbidden City in Beijing on July 8, 2008. Pollution levels soared in the capital exactly one month before the start of the summer Olympic Games on August 8, a sign that pollution still remained one of the biggest challenges to the event. (MARK RALSTON/AFP/Getty Images) 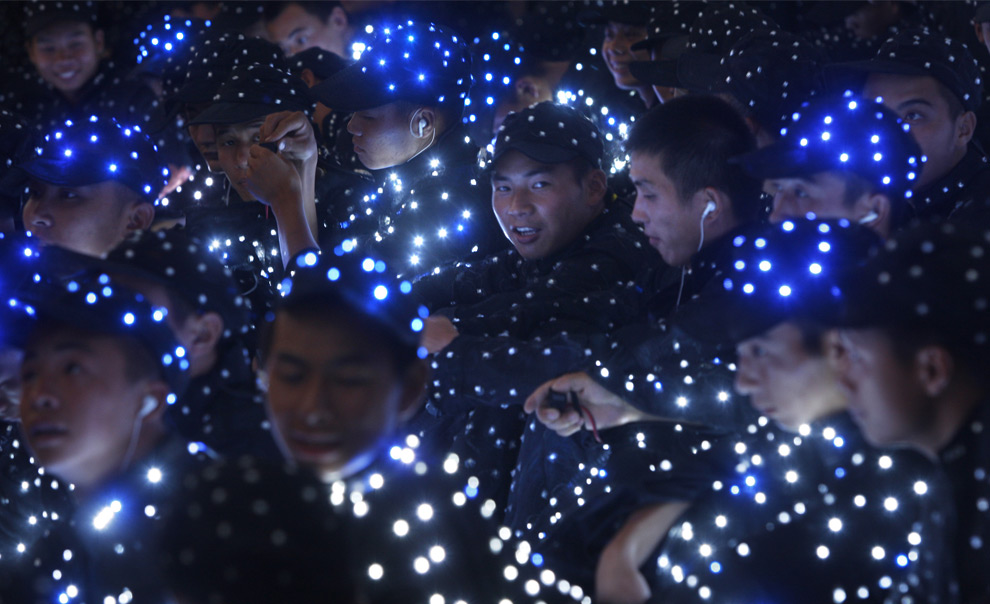 Chinese men wearing suits with lights wait to take part in the rehearsals of the Olympic Games opening ceremony in Beijing, China, Wednesday, July 16, 2008. Full dress rehearsals are conducted under a cloak of secrecy ahead of one of the most anticipated summer Olympic Games. (AP Photo/Ng Han Guan) 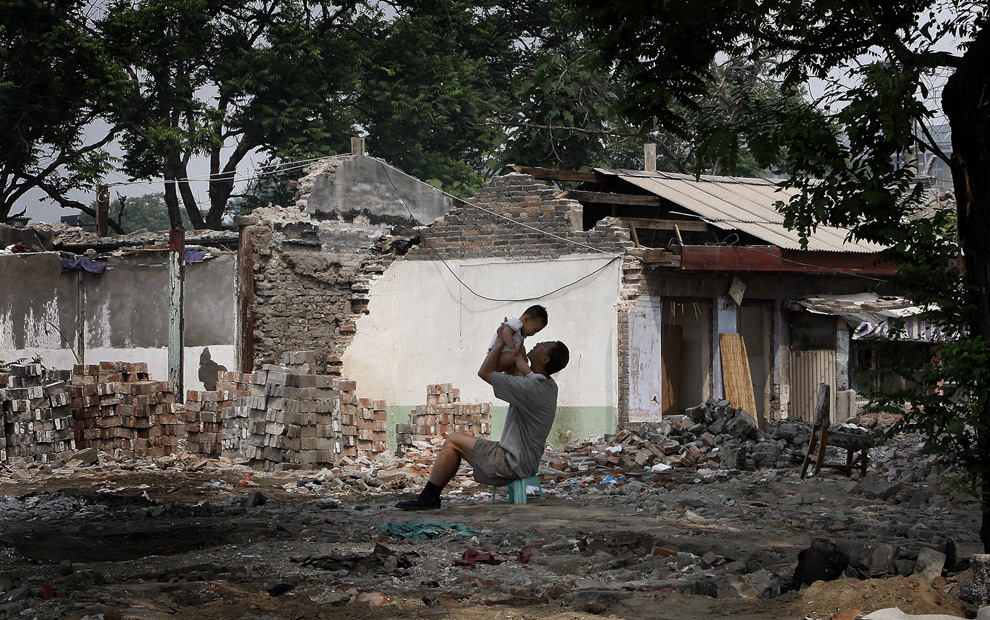 A Chinese man plays with his son near his partially demolished house at the Qianmen hutong in Beijing Sunday, June 8, 2008. Beijing, one of the fabulous cities of antiquity, is experiencing reconstructions to look more modern for the coming summer Olympic games. (AP Photo/Andy Wong) 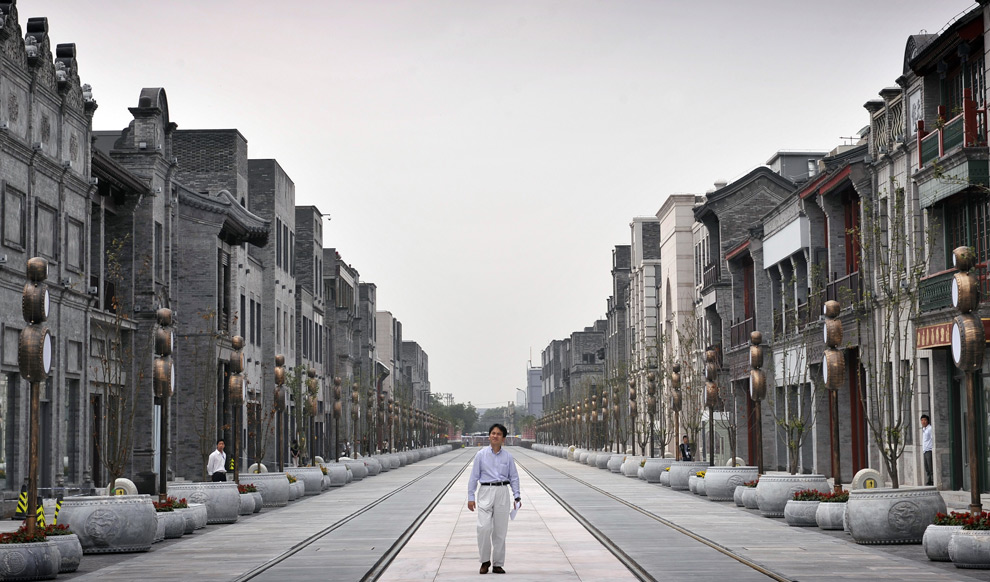 A visitor walks down a once historical street that belongs to Beijing’s oldest neighbourhoods but has now been turned into the city’s newest tourist attraction on June 17, 2008. Beijing city and local banks have poured 9.2 billion yuan (1.3 billion USD) into restoration work on Qianmen Street, they claim that their goal is to restore it to its former glory a century ago during the Qing dynasty (1644-1911), however critics have charged that the street has been turned into a Disney-style version of old China that bears little resemblence to reality. (PETER PARKS/AFP/Getty Images)